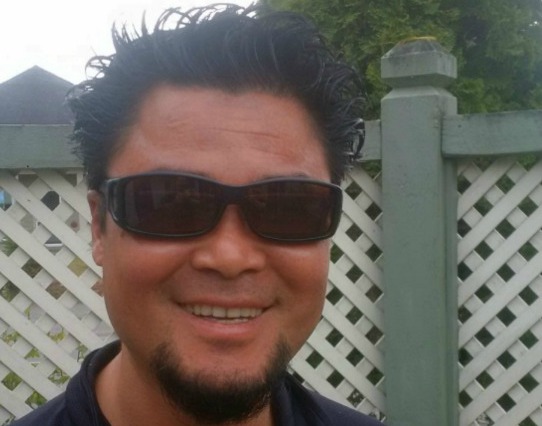 Insightful, articulate and gentle. Not the attributes one usually associates with a warrior.

When one considers the countless internal and external battles Jong Knobel has waged his entire life, there seems no better word to describe the 42-year-old Parksville man.

Homeless on the streets of a poverty-stricken city in South Korea. The loss of his mother. The abuse of an alcoholic father. Stealing fruit in a crowded outdoor market just to get some food in his belly. Flying across the world—it was the first time he’d even seen an airplane—to join adoptive parents and settling in a little town outside the rough-and-tumble northern B.C. city of Prince George.

This all happened before Jong was 10 years old.

And the worst was yet to come.

Jong reflected on his life recently from the safety of Island Crisis Care Society’s Hirst House in Parksville. The symptoms of his disease—schizophrenia—have forced him into dozens of hospital stays. Those periods in psychiatric care have resulted in the loss of numerous apartments and suites for Jong. But he says he has always been welcomed back to Hirst House.

“When nobody would take me, when the whole world throws you away, Hirst House has been there for me,” he says. “It’s like family—they all know me. I feel comfortable and safe.” 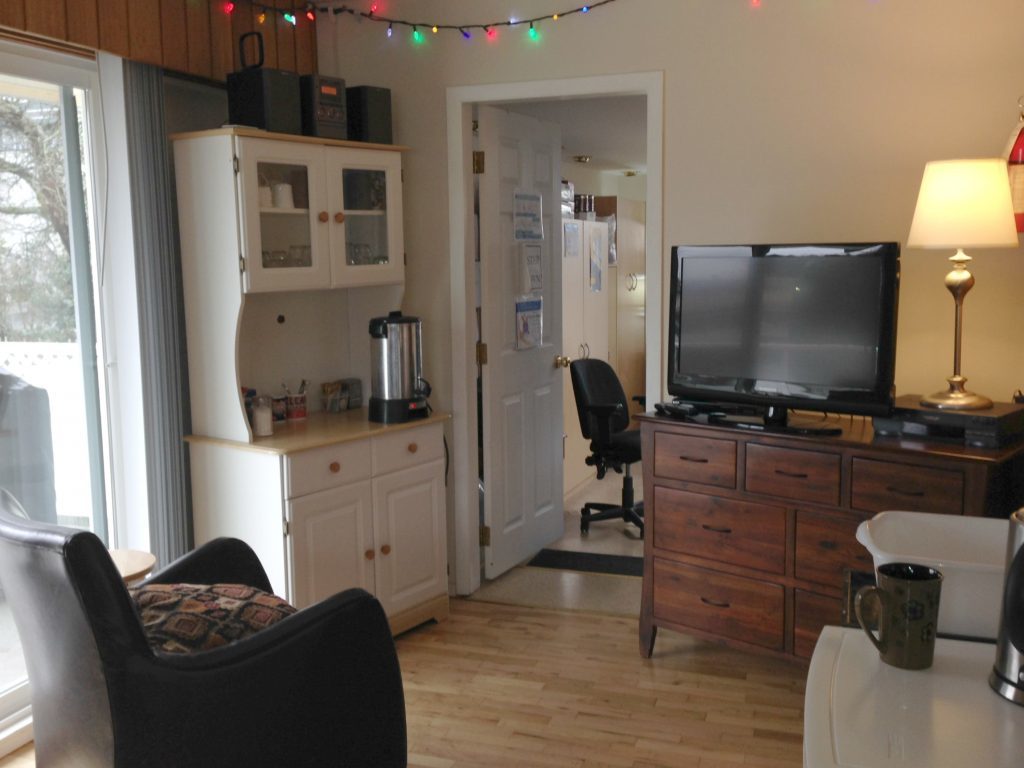 The voices. At first they were just a word or two. Then they were sentences, telling Jong not to talk. Or to get on his hands and knees and bark like a dog.

“I started to do all the things the voices told me because I thought they were demons and could hurt me,” he says.

Brushes with the law—minor stuff really, no violence involved. The trips to the psychiatric unit because he would be found in the middle of a street yelling. The loss of his rental unit because of his hospital stay. The circle is viscous.

Jong was the youngest of four boys. The family worked a modest farm in a mountainous region about 30 kilometres from the nearest city. His mother died when he was three and Jong says his father was an alcoholic who beat him. (Later in life, Jong would understand why he would often hear his father talking to people in empty rooms.)

“At the age of five or six, I began running away, living on the street in the city,” says Jong. “That was my first homeless experience.”

By the age of nine, Jong was in South Korea’s largest city, Seoul. He would bus tables and do dishes at restaurants for the occasional meal or bed for the night. His older brother found him and got him a job collating and delivering newspapers, along with a place to live.

“It was group living. I wasn’t used to that.” He was back on the streets of Seoul, which was home to more than nine million people at the time. He teamed with a couple other young homeless boys and made money buying packs of gum for 50 cents each and selling them to “partying foreigners” for a dollar. They spent most of their earnings at the video arcade and slept—kind of—on some cardboard in an abandoned building.

“Most of the nights there was no sleeping,” recalls Jong. “It was cold and windy and noisy.”

Eventually, Jong explains, an American social worker took the street-wise boys to a U.S. Army base, fed them, got them cleaned up and introduced them to a Catholic priest, who ran an orphanage and helped facilitate adoptions of young Koreans to North American families. Soon Jong learned he had been adopted by a Canadian couple.

“I didn’t know the world was round, let alone where Canada was,” says Jong. “But I was happy to just get somewhere I didn’t have to live on the streets.”

It wasn’t life on the hard streets of Seoul, but Jong says it wasn’t exactly an idyllic childhood.

“I didn’t really understand family dynamics, how to behave in a family.”

He went through his savings and ended up living in his car and then on the streets.

He was out of the family house by 18 and had to work three part-time jobs to make ends meet. He left high school one credit shy of graduating. He got a job at a sawmill and then got news his father and one of his brothers in Korea had died.

“I started to slowly get depressed and I couldn’t sleep,” he says. “This went on for months. I couldn’t even function. I knew I was messed up. I couldn’t remember anything and at the sawmill I was doing dangerous things. Eventually I stopped going to work. I’d put a knife to my throat in the mirror, wanting to end it, but I was too scared to do it. I knew something was wrong—I couldn’t even remember what I did 10 seconds ago.”

He went through his savings and ended up living in his car and then on the streets. He naturally gravitated to other street people and started stealing to fund a new and expensive drug habit. Caught in a house where he was stealing, his first brush with the law. He received a conditional sentence, but breached that when he took off to Vancouver when he was released from remand and his dad gave him $40.

Hastings and the Downtown Eastside. The poorest and most drug-addled postal code in the country. It’s not like Jong’s drug use or stealing life was going to decrease there. And it’s not like the treatment of his mental illness was going to increase.

Law trouble again related to stealing, but this time he was sent to Colony Farm Mental Institution, deemed not guilty of his crime because of mental illness. At Colony Farm Jong was told he had schizophrenia and he was heavily medicated. The voices remained, however, and the paranoia increased.

The voices. Imagine walking down a street in a sunny town, nodding a hello to someone who passes by. Jong has been that someone, and started wondering why you were nodding at him. What did you want?

“When I’m feeling ill, I feel like people are hunting me, going to murder me,” he says. “Sometimes I get super scared.”

Then the voices ramp up their assault. Jong starts screaming in public, perhaps in the middle of a busy road. The police come and it’s back to the psych unit and the loss of his housing again. Sometimes having stable, independent housing wasn’t a bowl of cherries either.

“Even when I had a place, I would walk around the city, worried that people are going to murder me.” 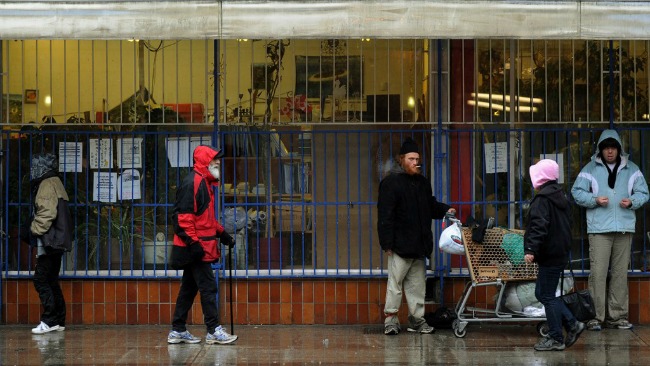 The Downtown Eastside in Vancouver. Photo courtesy of Maclean’s.

After Hastings and Colony Farm, Jong joined his parents, who had relocated to Nanaimo. He was seeing a social worker, who got him some housing. Jong invited others to stay, and that degenerated into drug use and eviction. While he says he hasn’t used crack or heroin since 2002, there were still those psychotic breaks, the voices, forcing him into hospital stay after hospital stay. One doctor suggested Jong check out Parksville upon his next release from Nanaimo Regional General Hospital’s psychiatric unit. He’s been living in the small Island city for about 15 years.

“Ever since I’ve been in Parksville, there has been less hospitalization,” says Jong. “I found it a lot more friendly and less drug activity.”

It certainly hasn’t been smooth sailing in Parksville. In January of 2017, Jong was at a local pub, had one beer, and went outside for a cigarette. A friend who he came to the bar with, someone Jong says also suffers with schizophrenia, burst out of the pub and stabbed Jong multiple times. His lung collapsed, his brain was bleeding—18 months later he is still recovering.

“I died on the operating table,” says Jong. “It was the most horrible experience I’ve ever had. It’s been a hard struggle—my body is still weak.”

The voices never really go away. But Jong says education and medication has helped.

“I had to learn about my mental illnesses and now I know what they are,” says Jong. “Medication helps so I don’t go out of control. The voices never go away but the medication helps.”

We asked Jong a couple of ‘what-if’ questions, starting with this: what if you had a microphone and the whole world could hear you—what would you say about your mental illness?

“It wasn’t my conscious choice in life to have schizophrenia, I inherited it (from my biological father),” says Jong. “And I’m not a bad person or a dangerous person. I’m the one who is scared of you.”

Then we asked: if you had a magic wand, what services or resources would you bring to Parksville?

“I would like to see that building built (proposed supportive housing at 222 Corfield Street) so I don’t have to be homeless and someone is there to help me, to take care of me with compassion and understanding.”

Editor’s Note: At ICCS we are careful to preserve people’s confidentiality and privacy. We present Jong’s story with his full support and permission. One staff person upon reading this story commented, “you should include the story of how Jong saved that person’s life.” That story will have to wait for another day. Every life has many stories and this brief sketch only touches on a few of Jong’s struggles and accomplishments. For example, Jong is a talented poet and we hope to publish some of his poetry in the future, so check back often! Thank you Jong for your courage in sharing your story.