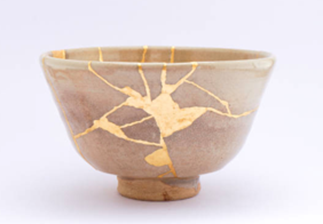 The Japanese do not discard their broken pottery. Instead, they mix gold dust with lacquer to make repairs. The break becomes part of the piece’s history and the gold lines running through make the object even stronger and more beautiful.

Sonia’s life reflects this beautiful philosophy. For a time mental illness shattered her but she has worked hard to put her pieces back together. She is a remarkably earnest, sincere and warm hearted young woman whose wisdom extends well beyond her 31 years.

We met in her studio apartment at Orca. Her pride in her home was obvious. She was brimming with excitement and ideas for ways to make the place her own including rearranging furniture to make a spot to paint. Her art is a lifelong passion that contributes to her healing. This is her story of breaks, struggles, and hope.

As a child Sonia worked hard at school, challenging herself through high school with an extra heavy class load. She dreamt of joining the military and training to become a medical doctor. A life of mental illness was not on her horizon.

This carefree oblivion ended as her school days were winding down and she experienced her first psychotic episode. Her life shifted instantly, and her dreams of a military career ended. She and her family had no idea what to do or where to turn for help. They had come up against something they didn’t understand. Somehow Sonia weathered this first storm and even felt some calm confidence at having done so. It was just the beginning of a hard road ahead.

A family move piled additional stresses on Sonia. This triggered a relapse into a serious psychotic episode. Her mind filled with voices and became disconnected from reality. For four days she wandered alone through their new city, homeless, terrified and frantic. It felt like “Hell on earth”. She ended up at the pulp mill, and police were called. They released her into her parents’ care, but then she attempted suicide and landed in hospital. It would be her home for the next six months. Here she learned the delusions, hallucinations, and disorganized thoughts had a name. She had schizophrenia.

The puzzle had a name but not yet a solution. A long hard road lay ahead. Treatment tends to rely on antipsychotic medications, counselling, and coaching in life skills. It usually requires life long management. She made good progress while in hospital, but left before she was ready.

Her memories of the following months are choppy. She felt broken and out of control. No-one could understand her behaviour. One by one, her friends disappeared. She attempted suicide several times.

Another family move, triggered a new crisis and she was admitted to the hospital there. Here she found supportive people who helped her understand her illness. They taught her to recognize her triggers and strategies for staying calm. She also met a woman who got her involved in volunteer work. This changed Sonia’s world and she says it saved her life. She became focused on educating people about mental illness and willingly shares her experiences with others.

Now, Sonia hopes her passion and honesty will help to reduce the stigma and fears associated with mental illness. At the same time through the pain and difficulty of her experiences, she has cultivated the expression of her pain into new forms – first in writing, and later in works of art which allow her to share her talents and emotion with others. Her art is a life long passion that contributes to her healing. Her works are strong and deeply beautiful – gifts she can share now that she has been “mended with gold”.

Sonia is a client in ICCS programs in Oceanside – first in Orca Place and then in Hirst House and now again at Orca Place. Although she discovered she was not quite ready to fly solo she is progressing towards independence and happy that Orca Place and ICCS were there to catch her when she stumbled. Help from people and homes are intricately woven gold threads in her healing. She is thankful for the gift of time she has gained with her move back to Orca Place: time to focus on her mental health and time to develop and work on personal goals. Her organizational skills became obvious as she showed her charts for short and long term goals. The plans she has developed are working for her and she hopes that her example, and her story may help others as well.

While Sonia’s story is unique, her situation is not. One in three people in Canada will experience some form of mental illness in their lives. Many people who access ICCS programs have experienced challenges with their mental health – challenges that they need support to overcome. Step by step, with that support, lives can re-emerge, and the gold can shine through. 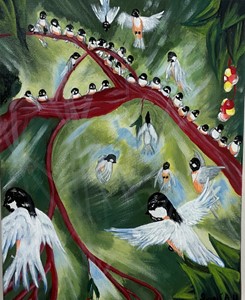 Heavenly Choir – a painting by Sonia