Mystie’s story: A tale of resilience 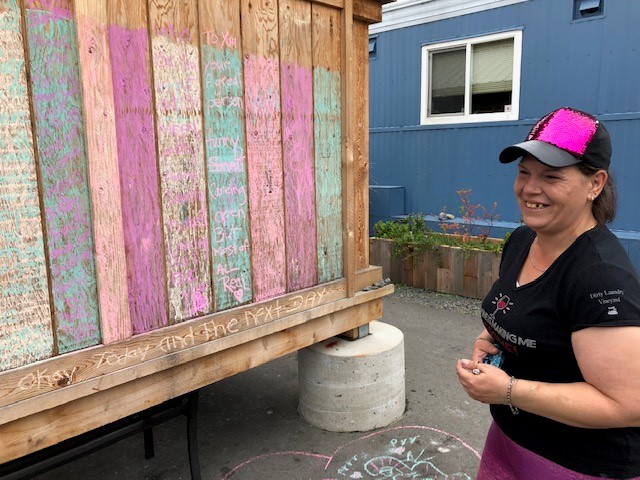 It’s an overcast day, but Mystie is undaunted.

A diminutive woman, she comes into the room in a pink sequinned hat and leggings to match, shy but excited to talk about her story and of her new role as the first informal peer support worker at Newcastle Place – one of the 12 programmes run by Island Crisis Care Society in mid-Vancouver Island.  Yet even as she sits down in a chair in the centre of the room, there is a sadness that belies the candy coloured sparkles she wears.

Her story is shocking.  Beaten and abused by her alcoholic mother as a child, her life has been a spiral of pain.

Her escape was school.  There she found affirmation, pursuing excellence in her studies and in sports – “anything so I didn’t have to go home.”

But home caught up.  She had to miss a few weeks of school because she was so marked up from abuse.  When she returned, the teacher took her to the principal’s office because she refused to put on her team uniform in front of the other girls.  When she removed her shirt, her teacher fell to her knees in shock and the principal called the police.

She went into foster care after that, but the system was not kind, and she was moved from home to home, all the while wracked with worry about her younger sisters who were still with their mother.  She had escaped, they had not.  She managed to graduate high school, but then, before she knew it, she was on the streets.

Life on the street wasn’t much better. She moved from Ontario to BC, and her welcome was violent, stabbed by the first woman she met on arrival.  She tried a couple of safe houses but ended up back on the street…and then one day she walked into a different kind of place.  “Finally, I went to the Ladies’ shelter for a couple of days [Samaritan House] and then I’ve been here [Newcastle Place] since.”

She has been at Newcastle for 8 months, now, and though it hasn’t been easy, the stability has allowed Mystie to start to find herself again, and to show herself as, above all, a woman who cares about others.  Though she couldn’t save her sisters when she was young, she is compelled to try and help those around her. She quickly became known as a listening ear, a caring helper, and an advocate for those who could not speak out for themselves.

Then came the turning point.  When the Newcastle Place snacks policy changed because of budget cuts, Mystie spoke up.  Her advocacy paid off.  Not only did the staff listen, they made her a part of the team that goes to the food bank to collect snacks.  At the same time, they saw that her natural empathy made others reach out to her, in ways that the staff couldn’t do.  Where outreach workers faced a wall, Mystie was able to get in and listen to others, to sit with them, and even help them do things they were having trouble with, like cleaning their rooms or doing laundry.

It wasn’t long before the Newcastle team approached Mystie to take on an informal role as a peer supporter in Newcastle Place – and Mystie jumped on board.  “Mystie is developing and creating this new role as peer support worker here at Newcastle. She is helping us see what we need to do with that role of peer support, and filling in any gaps with clients,” says Sandra Fox, Newcastle Programme Manager.

Mystie jumps in, “So now, I hand out snacks when outreach leaves, I hand out [harm reduction] kits. I also sit with them even if somebody is having a crappy day – 20 minutes with me and they’re usually laughing.” 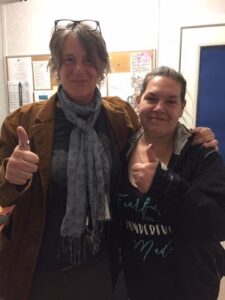 Mystie is never happier than when she is busy helping.  She is part of the cleaning crew at Newcastle and helps to advise on client concerns and needs.  Even more, though, she is a friend to those in the direst need.  The affirmation she gets from staff is making a difference for Mystie too.  “These guys are my family… for them to acknowledge or even talk about me in a positive way – I don’t get that.”  This connection with outreach staff and peers gives her a confidence she has never known.

On her own initiative, Mystie has started a wall of appreciation at the back of the compound to share her gratitude for the staff at Newcastle Place – a chalked in rainbow wall of compliments and thanks for the people working there.  Daily, she encourages her peers not to grumble, but to go out and write a word of thanks to the staff, dwelling on the positive, and the future.

Above all, she still wants to help others – kids like she once was who don’t have anyone to let them know they can be ok.  “I picture myself like going to schools, talking to students  – I think when it comes to abuse, whether it’s at home or relationship wise, I don’t think people talk about it enough for them to know that there is help out there.”