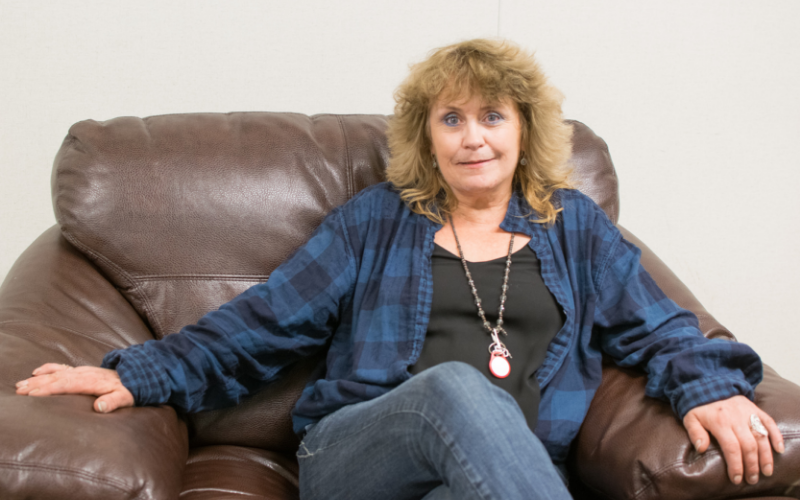 I wait in a office at Newcastle Place, a supportive housing site near downtown Nanaimo that currently houses 60 people. The walls are nondescript and hold up memos and phone numbers. A Naloxone kit, which looks like an oversized eyeglass case, sits on top of a desk alongside neat stacks of paper. Tina, a Newcastle Place resident who has agreed to tell me her story, should arrive soon.

“Come on, Bear,” a woman says in the adjoining hallway.

Dog paws click and clatter on the hard hallway floor. A moment later, a woman and her dog enter the office.

“Tina,” she says with a handshake, “and this is Bear.”

Bear has most of the features of a Rottweiler, but, instead of sleek black and brown fur, he’s shaggy like a Golden Retriever. He jumps around the office, sniffs my legs, and allows me to pet his back.

Tina sits in the chair across from me, and Bear lies near her feet. She appears to be in her 50’s and is wearing a plaid shirt, jeans, and slippers. Her blonde, shoulder-length hair flips up at the ends.

She tells me that she used to live in a basement suite with her boyfriend and Bear. After losing the suite and dealing with health problems, she became homeless and moved to Discontent City, the sprawling tent encampment at 1 Port Drive.

While being homeless on Vancouver Island means warmer winters than the rest of Canada, it also means enduring one of the wettest climates. The biggest challenge at Discontent City, Tina says, was staying dry.

Another challenge was the public opposition to the encampment, which sometimes turned violent. People threw rocks at Tina from the rooftop parking lot of the adjacent Port Place Shopping Centre, which offered a bird’s-eye view of Discontent City.

“[People threw rocks] because their life had been smooth sailing up until then. With the flick of a hat, it could’ve been one of their kids having a bad run of the luck. That’s all it takes. You know what I mean? People are way too quick to judge,” Tina says. 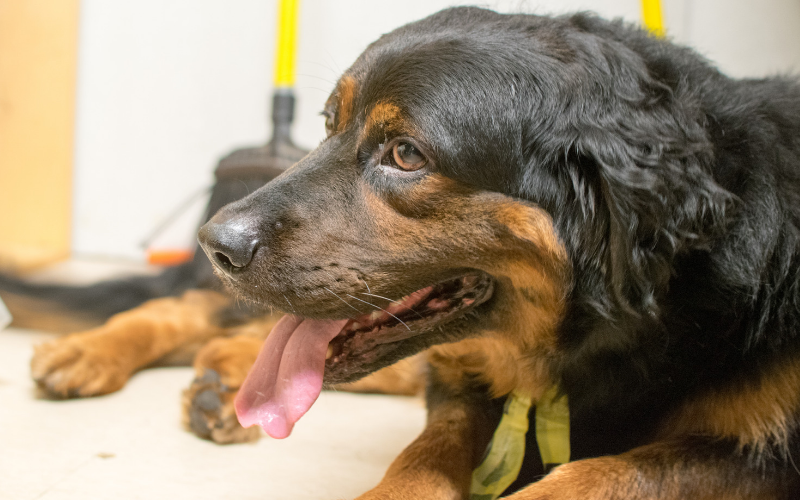 Tina moved into Newcastle Place when it opened in December 2018 in response to the closure of Discontent City. The difference between Newcastle Place and living in a tent?

“A roof over your head. Hot water. Meals,” Tina says.

Tina mentions the help she receives from Newcastle Place support workers, from transporting Bear to the veterinarian to reminding her of appointments.

“The staff is wonderful. All you have to show is a little effort and then boom, the staff help you get going to the next step,” Tina says.

“They’ll give you a little nudge if they think you need it.”

Tina sees her role at Newcastle as not only working on herself, but also helping younger residents.

“Everyone’s got their issues, right? I’m one of the older ones, so the girls listen to me.”

Still lying near Tina’s feet, Bear whacks his tail against the ground three or four times. Tina laughs and pets him.

“He’s my best friend. I won’t go anywhere without him,” Tina says.

Bear has another best friend, a rabbit named Biebs that Tina rescued after a hawk attack.

“A hawk had [Biebs] by the eye and the ear about ten feet up in the air. So then I started to scream and the hawk dropped it,” Tina says.

“And now I’ve got this know-it-all rabbit that thinks he’s a dog.”

Tina leaves the office to retrieve Biebs from her room, and Bear trails close behind. When they come back, Tina has the rabbit cradled in her arms. 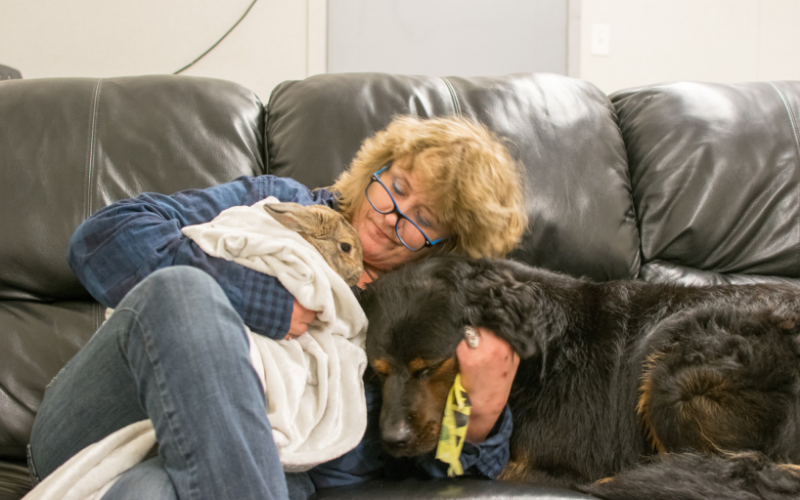 Tina snuggles with Biebs and Bear.

I ask Tina if she has any plans after Newcastle Place.

“Of course I’d like to get into a bigger place. I just have some health issues to deal with first,” Tina says.

Tina hopes that, after she deals with her health issues, she’ll be able to move into her own place. She says support workers are already in the preliminary stages of helping her find a place.

But, for the moment, she is focused on her life at Newcastle Place.

“It’s a start, right? It’s so much better than living on the street.”